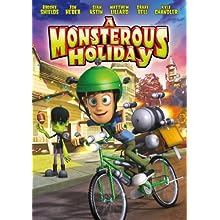 I was sent a pre-release-date copy of “Monsterous Holiday” to watch and review here. To get the best possible review, I sat down with the boys (8 and 10 now) and we all watched it together. My first impression was that the animation was a bit dated-looking (early 2000s) but considering I can barely draw stick people I really have no right to throw stones about how other people draw. So we’ll just let that go and say that the animators draw much, much better than I ever could. I did wonder though, why on earth is the mom character’s butt so damn big? The mom character has a huge booty and the dad character has shoulder girth the size of Texas. They’re the only characters with SUCH largely out-of proportion body parts it was kinda weird. Not all moms have big butts!

Okay, moving on from the size of characters’ body parts… The storyline is pretty simple and comfortingly predictable. Boy (Andy) isn’t interested in sports, football coach dad can’t see past the whistle on his face to think that perhaps there’s more to life than sports, boy wants to do science fair, dad puts him on the football team… Personally I have a HUGE issue with the domination of sports in our culture, and would LOVE to see more emphasis and glory put in schools’ science labs as there is on the football field. There is so much more to life than sports. I liked that “MH”, in it’s own somewhat cheesy way, carried the message of “there’s more in life than sports”. Yes, they did play “the big game”, and Andy’s new friend who didn’t get out much gets to live his dream of actually playing football, but it wasn’t the biggest thing in town that day.

I asked the boys if they liked it, they both said “yes”. I asked what their favorite part of the movie was, and A (age 10) said, “When Andy blows everything up”. Figures, who doesn’t like a good explosion now & then, right? B said he didn’t have a favorite part, he just liked it all. Could be he really loved the whole movie, could be he liked the fact he got to stay up 15 minutes past his bedtime to finish watching it. Either way, it was enjoyed all around. At roughly 45 minutes long, it’s not so much a ‘movie’ as it is kind of a long-ish TV show. I appreciated the brevity, to drag the story out longer would have been a detraction. It’s paced such that it moves along well, doesn’t drag, and hold kids’ attention. No scary moments to note here, this is safe for any age or anxiety level.

“MH” is a direct-to-DVD release, releasing on 15 Oct of this year (2013). Amazon has it available for pre-order now, Netflix wasn’t showing it in their selection at all yet. If you’re looking for something quick, Halloween-y and good for any age kid, go for it.