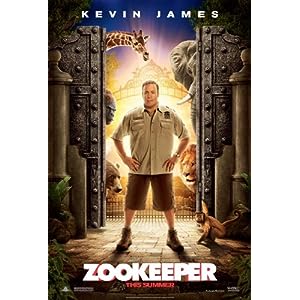 Zookeeper was.. well, one of those movies that I think was confused as to who its target audience is. Is it a silly talking animal movie for kids? Is it a romantic comedy date movie for adults? It tries to be both at the same time, and that’s just hard to do.

Zookeeper tells the story of zoo employee Griffen Keyes who’s heart was broken when his girlfriend rejects his marriage proposal. He still carries a torch for her, and after 5 years she comes back and wants him back, but wants him to change and get a high-dollar job at a luxury car dealership. The animals at the zoo don’t want him to leave, and they try to give him dating advice, at times that advice involves frat-boy-level biological function “humor” (peeing in a plant at a restaurant? Is that really something we want to show our kids? Really?) As Griffin changes to be who this girl wants to be, he is not happy with himself, and discovers who he really is and he finds his true love interest in another character.

The kids LOVED the talking animals, but had trouble with the adult theme and plot of the movie. My 8 year old had to ask a lot of questions as to why he was doing the things he was doing, and what the “point” was. It’s not a scary movie by any means, though there is a scene at the end where Griffen and a gorilla are dangling from and eventually fall from a NYC bridge, this high-altitude scene could bring about some gasps from some kids. It’s not a “bad” movie, it’s very well made, I love Kevin James, and he does play the part VERY well.. it’s just that it’s really confused as to who the movie was made for. If I was dating, I wouldn’t take a date to it, even though it has the romantic-comedy storyline. But while kids will love the talking animals, they may not grasp the storyline, so what’s the point in taking them?

It’s not a bad movie, it’s just a well-made movie with an identity crisis.