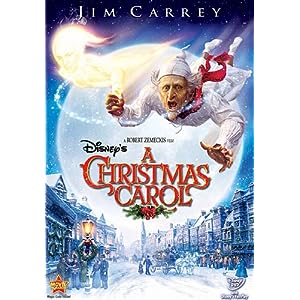 I wanted so bad to go see this in theaters last Christmas, but wasn’t quite sure if it would be too much, scary-wise for my boys. My older son ended up going to see it with his Auntie S. when they were in town for Christmas, and he said he liked it, and that it was a little bit scary but not too bad. It’s taken almost a year for this to be released to Blu-Ray/DVD, and I’ve just now finally gotten to see it.

Pretty much anything from the directive talents of Robert Zemeckis is going to be good work, and he and Disney don’t disappoint. It is an interesting combination of live-action and animation. Today’s computer technology allows for some really intricate effects, taking the actors’ voices & faces and making an “animated” movie from it. Very, very high quality visual production! This story has [obviously] been told & retold, acted, recorded & animated so many times through the ages, and each version of it takes it’s own twist. I do like what Disney has done with the story, the emotions are so accurately conveyed.

In a story with ghosts & sadness, there are going to be some scary parts. The ghosts and the scene towards the end where he returns home could be VERY frightening for a kid. Marley’s ghost suffers some structural failure of his ghostly jaw (which I found to be quite amusing, but could creep some kids out). I will actually go so far as to not recommend this movie for kids who are easily frightened/scared. It’s a GREAT movie, fantastic effects, so for kids who like a little scary-ness it’s a must-see. As always it depends on the individual child’s threshold for being freaked out.

The basic moral of the story (be kind to others) is universal, and this story can lead to a good discussion with kids about the benefits of being nice to others. A good story, a great production, this definitely should make your holiday movie list!