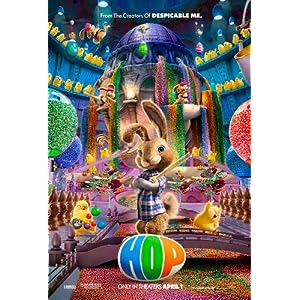 Yes, I bought into the type and took the kids to see “Hop” on it’s opening day today. It looked kinda silly, kinda goofy, something light to start the spring break off with. I was pretty much right on… It wasn’t great, it wasn’t awful, but it was cute, and it was funny. And it had David Hasselhoff. So, really, what more could a silly kids’ Easter movie ask for? 🙂

From what I’ve seen, this movie hasn’t been getting the best critical acclaim. Well folks, this isn’t “The King’s Speech”, this isn’t “Hurt Locker” or “The Blind Side”. It’s a kid’s flick about the easter bunny. What exactly were they expecting? Yeah, the bunny poops jelly beans. It’s juvenile, it’s silly, and the girl eats one. It’s FUNNY. It’s supposed to be. So keep in mind, that I base my critiques of movies based on what they’re supposed to be, I don’t compare all movies to the same standards. Movies that are meant to be FILMS, like “King’s Speech”, are in an entirely different league than something like “Hop”. I judge on a sliding scale, keeping in mind the intent of the movie, what it’s supposed to or trying to be, instead of grading everything as though it’s in competition with “Casablanca” or “Gone With the Wind” for Best-Movie-of-all-Time.

“Hop” starts off with E.B. being shown the easter factory. It’s a pretty cool factory, my 7 year old loved all the mechanical assembly lines and machines. We’re also shown a scene of a young boy seeing the easter bunny in his yard delivering his easter basket. Flash forward 20 years and E.B. no longer wants to be the easter bunny, and the young boy is now an unmotivated out-of-work guy living with his parents. The two (E.B. and the character Fred) together work through their issues with their fathers, and the happy ending was a bit cheesy with the Christmas parallels, but goofy enough that it fits the movie.

I absolutely loved David Hasselhoff’s appearance. It’s great that he doesn’t take himself too seriously, and can be silly enough to have such fun with a part like this.

Don’t go to this movie expecting a moment of cinematic grandeur. You’ll be disappointed. Go expecting a silly kids movie with plenty of laughs and you’ll have a grand time.