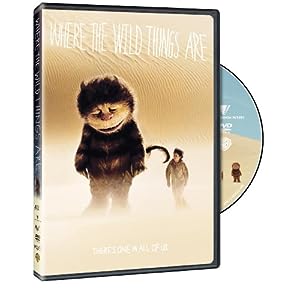 As with most movies, the movie and the book that it’s based on are quite different. That’s not necessarily bad, just different. “Where the Wild Things Are” is no exception to this rule. We all remember the Caldecott Medal winning book of the same title, however to make a movie that was entirely true to the book would be a movie that would last… about… 15 minutes. Maybe 20.

I had heard mixed reviews about this movie when it first came out in theaters. I don’t get to go out to movies often, in theaters, as my two kids (5 and 6) are, um, energetic, yeah, energetic. It’s hard to get them to sit still for anything, let alone sit still and be quiet in a theater with other people who’ve paid good money to watch a movie. So I did not take them to see this in the theater, and instead read up on reviews. Some were mixed, some were good, some were bad.

This is not an electronic-babysitter-movie. This isn’t “Toy Story”, that you can just plop the kids down in front of and zone out for 90 minutes. It’s not that this isn’t a movie for kids, I read a great many reviews that said that this isn’t a movie for kids but a movie about being a kid. I disagree. I think it’s both. However, I think that this is a movie to sit and interactively watch WITH your kids. Little kids, 2,3, maybe even 4 years old (depending on the child’s maturity), aren’t going to get anything from this. You get into 4,5, 6 year olds & up, and this movie can bring about good discussions about lots of emotions that are going through everyone’s mind, kids & adults. Anger, sadness, frustration, running away, etc. It’s thought-provoking & poignant, while being just scary enough to make the story, but not overly frightening that it will make kids stop watching the movie in fear or result in nightmares or fear of the movie for years to come.

The first few minutes of watching this with my 5 year old, I almost regretting renting it, and wasn’t going to watch it with my 6 year old. As the movie went on, I liked it more and more, and we all sat and watched it together later.  We had some really great communication about how to treat people, and how to react to how others treat us.  Watch this movie when you’re in the mood to sit and spend a couple hours with your kids, and use the opportunity to talk about the characters’ feelings and how it relates to your own lives.