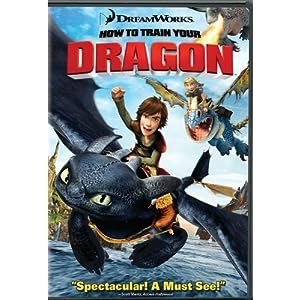 My 5-year-old loves, and I mean LOVES dragons. So when he first started seeing the TV ads for the new Dreamworks movie, “How to Train Your Dragon” it was all he could talk about.  We’ve actually seen this in the theaters twice, which is a new record, I’ve never gone to see a movie twice in theaters.  Ever.

I figured that since the theme of the whole movie was dragons, that there would probably be some mildly “scary” or “intense” moments in it, and there are.  My little guy isn’t afraid of anything, my 6 year old is a bit more cautious, but not really a skittish or easily-frightened-by-movies type.  So I wasn’t very worried about the scare factor, but if your kids are easily frightened, it is something to consider.  The topic of death runs throughout the movie, with the characters having to deal with the idea of killing a dragon, dragons possibly killing them, parents going off in search of the dragon nest and knowing that most of those ships never return.  The scene at the dragon’s nest is very intense, with a battle, fire, rescues and the main dragon character being chained to a boat that sinks in the water.  I could see this movie being a bit scary for younger kids who scare easily.

That being said, this movie is awesome! Dreamworks has NOT let us down with this one.  The story itself is well-balanced, easy to follow and just silly enough to keep it lighthearted to balance the intensity.  It never drags or made me look at my watch wondering how much time was left, but wasn’t so fast-paced that kids couldn’t keep up with the story.