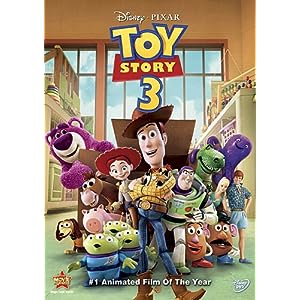 Yes, Pixar has done it again with “Toy Story 3”.  The latest installment in the much-loved Toy Story series blew Pixar’s previous first-weekend box office returns out of the park, and most deservedly so.

Real-time has elapsed since Pixar brought us Toy Story 2 (1999), and Andy is off to college.  His toys face an unknown fate, as Andy has to decide if they should be taken with him, put into storage, or sent off as donations.  The bag of toys he wants to put in storage in the attic ends up accidentally put to the curb as garbage, but the toys escape and make their way into the donation box which is delivered to a day care.  The toys face a myriad of foes in this institution, led by a big purple teddy bear, and a grand escape plot is hatched.

My sister-in-law said she cried.  Her oldest son is off to college in the fall, so it struck a big chord with her.  Many of my friends said they bawled like babies too.. I’m not really much of a movie crier (the last movie I cried during was “Apollo 13”, yeah I’m weird that way) and while I found the story heartwarming, it didn’t pull on me that much.  At the end, I remarked to my kids about how wonderful it was that it ended the way it did, and didn’t it just work out great for everyone!  No tears here.  Though a friend of mine’s little girl (age 5) was apparently crying so hysterically she almost had to be removed from the theater.

There was a bit of a scary scene involving a trash incinerator, which kids who scare easily may find a bit disturbing.  However, in keeping with Pixar’s “Happy” themes, it is not a scary movie.  My almost-7-year-old asked lots of questions about garbage incinerators afterwards.  Most of which I had to google to answer… he’s a very mechanical little guy and I really have no idea how incinerators work.  Well, I should say I didn’t, but I do now.

I have to give huge kudos to Javier Fernandez Pena who does an INCREDIBLE job as Spanish-speaking Buzz.  The voice was done in character SO well, I thought that it was Tim Allen speaking the Spanish part, I was shocked to see a different actor’s name roll on the credits for the Spanish Buzz!  All the other actors are back to continue their roles.  There are no two better voices for Woody & Buzz than Tom Hanks and Tim Allen, the casting for the them, and the entire toy box, is nothing short of perfection.

Yes, we will be at Target, Disney coupon in hand, to buy this the day it comes out on Blu-Ray.