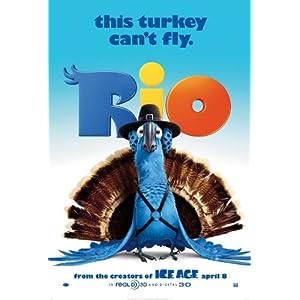 You know what sucks? Wanting to see a movie, but having kids misbehaving SO badly that there’s no bloody way that I would step foot in any public place with them, let alone a place like a theater where they’d be expected to be quiet. So our planned Saturday viewing of “Rio” didn’t happen. Yesterday (Sunday) whatever demons possessed my two little hellions had passed, and we were finally able to see it.

From the previews “Rio” looked to me to be pretty, well, fluffy … So I wasn’t expecting too much from it. I could tell from a lot of the scenes (flying over the jungle, the scenes of the city of Rio, etc) that it was made with the expectation of being seen in 3D. I don’t “do” 3D though, it annoys me, but the Hamilton IMAX 16 did show the 2D version on their big screens, so it was still visually pretty cool.

“Rio” starts off in, well, er, Rio, where we’re introduced to baby Blu, who ends up being sent to Minnesota and adopted by a little girl. The scene transition from Rio (sunny, beautiful, tropical, exotic) to Minnesota (NOT Rio) is hilarious. I busted up laughing. The other people in the theater were probably wondering what the heck was wrong with that crazy woman in front laughing so hard… Blu is propositioned to go to Rio to meet up with Jewel, the only other known blu macaw, and get together to, you know, repopulate the species n’ stuff.

Blu and Jewel end up stolen, are handcuffed (footcuffed?) together, and since Blu can’t fly they have to learn to work together and get along in order to find a way to get separated. Their adventures are somewhat predictable, however given the target audience (kids!) the plot/story is perfect. I found myself laughing out loud lot a LOT (it really is very funny), and my kids (6 and 7) absolutely LOVED it. It was a big hit with them, and they talked about it all the way home.

In the movie, both birds are stolen (birdnapped?) and there are some scenes with birds in cages in a dark room with the “bad guys”. It’s a little “dark” I suppose in those scenes, but I think “Tangled” rated higher on the scare factor than “Rio” does. My 7 year old asked several times if the bird was going to get back to the girl. I told him yes, and to keep watching… but I didn’t see any real fear or scaredness (is that a word?) from either of them.

Jesse Eisenberg is a doll, I saw an interview with him on Letterman not long after he did “Social Network”, and he was hilarious. His flat, kinda monotone voice is PERFECT for Blu’s character. All the characters are well-voiced, but Blu’s in particular was a very good fit. The musical numbers throughout are silly, but fitting with the movie.

We all loved “Rio”, and think it definitely deserves a spot on the Netflix queue once it comes out.