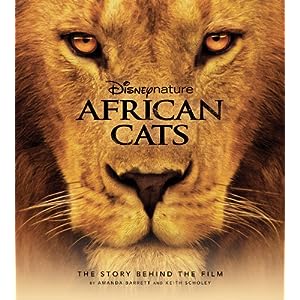 “African Cats” is Disney’s 2011 Earth Day movie. My 6 year old LOVES all things animals, lions and cheetahs included, so I took him to see it this morning while older son was in school. I don’t think he would have had quite the same appreciation for it…

When you have a big budget, and the Disney name behind you, it’s pretty hard not to come up with some pretty spectacular footage, and Disney doesn’t disappoint. The scenery/visuals are truly awe-inspiring, absolutely beautiful. Samuel Jackson lends his voice to the documentary for the narration, and handles it quite nicely. His voice is the only “human” aspect of this movie, there are no humans seen, the film focuses entirely on the animals and their natural environment, their actions not disturbed by humans.

The main characters of the story are a lioness and her cub and a cheetah mom and her cubs. They are followed as the cubs grow and learn, and as the circle of life moves around them. The differences between their lifestyles are explored, lions living in prides and cheetahs being solitary creatures. Some elephants, warthogs, zebras, buffalo, hyenas and some assorted birds also make guest appearances. The individual lions and cheetah mom are given names, and help the view to “bond”, per se, with them.

“African Cats” is basically a 90 minute long nature show/documentary. So, keep that in mind when thinking of taking kids to see it. If the kid is really, really into animals, especially lions & cheetahs, they’re going to love it. If they’re not so much the “nature loving” type, it’ll be hard to get them to sit through it, especially if they’re quite young. My little guy sat spellbound the entire time, that’s how much he LOVES animals. The movie doesn’t sugar-coat the realities of nature either (which I liked and appreciated). There are some “bad” things that happen, animals get eaten by predators, die, and other assorted not-so-niceties that are a very real part of nature. These are presented not in a sensationalistic, gruesome way, but in as gentle a way possible, while still making it quite clear what has happened. This could be disturbing to some kids.

This latest addition to the Disney Nature series earns it’s place in the series among the others, another beautiful Earth Day release.

Happy Earth Day to all, and to all a good night.