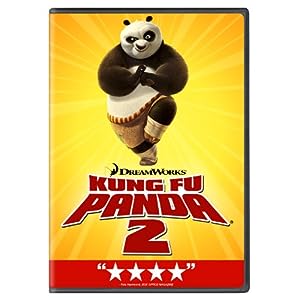 Yes, I know I’m terribly late in getting these most recent reviews posted. It’s summer, the kids aren’t in school and that leaves pretty much *zero* time for me to get anything done that *I* want to do.

Enough of that tomfoolery though, and on to my review of Dreamworks “Kung Fu Panda 2”. Jack Black is back along with the other vocal talents from the original 2008 “Kung Fu Panda”. It was pretty much a given that Dreamworks knew they had an automatic WIN with KFP2, building on a successful established franchise and releasing just in advance of school getting out, being the first of the kids’ summer movies to hit the screens.

We get a glimpse of the history of Po, ultimately seeing how it is that a Panda comes to be raised by a duck. I like the positive message of adoption in KFP2, that even though Po does learn about his biological past, nothing can replace the love & upbringing that his dad (the duck) gave him. Adoptive parental love is just as strong as biological parental love, and I think that was a really great message.

The “bad guy” in this movie is really pretty sinister, and could be scary to skittish little kids. The evil peacock commits mass genocide as he slaughters every [or so he thinks] panda in China in an attempt to ensure that a prophecy of his destruction doesn’t come to pass. There’s a lot of action, and dark scenes with the evil peacock.

Po and his comrades face the challenges valiantly and save the day, with all the humor and silliness of the 1st KFP. Definitely a must-see, or rent as the case may be… as this is probably posted too late to still catch it in theaters.