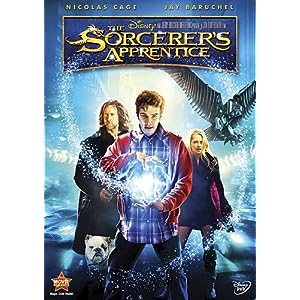 Okay, I admit it, I’m a sucker for pretty much any movie to come out of the Disney studios, and “Sorcerer’s Apprentice” is no different.  I went into this movie with high hopes (and 2 very squirmy kids), and I was pleased with the outcome.  My kids.. were not quite so pleased.  At 5 and 7 they were simply too young for this movie, not because of any particular violence or scary-ness, but it was too much “story” and not enough “kid action” for them.  That doesn’t mean this isn’t a good movie (it is), but it does mean that I recommend this movie for the 8-10 and up crowd, and suggest leaving the very young at home.  There are a couple moments that a very easily scared child might gasp at a little bit, but nothing that raised my radar as being “OMG SCARY”.  No gore, no gratuitous violence (this is a Disney production, after all).

I am a huge fan of the “National Treasure” duo, and this definitely follows in those movies’ lines of great stories.  It’s fiction, it’s fantasy, don’t get caught up in the unrealisticness (yes I made that word up) of a college kid having his own massive set of Tesla coils (+2 points for you if you know what a Tesla coil is) in an underground lair beneath New York City.  Of course it can’t really happen in real life, that’s why it’s a movie!  Just go with it.  It’s fun, it’s entertaining, it’s well written, it’s well acted, and it’s well worth the 2 hours in the theater to see it.

The settings of this movie particularly caught my attention.  I loved the antique store, the underground tunnel was fantasy-perfect for the story, the effects like the plasma balls were just enough to be what they needed to be without crossing the line to appear corny or weird looking.

There were a few moments of awkward-feeling humor, and I found Jay Baruchel’s (Dave’s) voice to be a bit annoyingly nasally at times.  He also did “How to Train Your Dragon”, and it seemed less annoying there.  Apart from that, it’s a good way to spend 2 hours away from the obnoxious summer heat wave we’re experiencing and sit in a nice air conditioned theater.