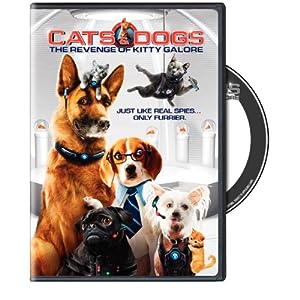 It was really hot yesterday, I mean REALLY hot, and I figured, what the heck, I’m taking the kids to the movies.  The only thing interesting in the theaters for the kid set was “Cats and Dogs: Revenge of Kitty Galore”.

I think Bette Midler had a little too much fun playing the evil villain cat, Kitty Galore. I can not say that name without snickering like a 13 year old, thinking of the Bond movie girl with a “similar” name…  Her vocal talents in bringing the voice to life were the highlight of the movie.

I suppose there were worse ways to spend the afternoon.  It wasn’t a bad movie, though having been spoiled by the likes of “Toy Story 3” and “Despicable Me” lately this just isn’t in the same league.  The kids liked it, it was full of crude kids humor which they appropriately giggled at.  There weren’t any moments that stick in my mind as being terribly scary.  The animals partook in a lot of “human” activity, so it looks like some of the animals get hurt, but there’s no graphic violence or animals being splattered anywhere or anything.  (I’m sure PETA saw to it that no animals were harmed in the making of this movie.)

I can’t be too hard on the movie though, it is after all a summertime kiddie flick that’s meant to entertain for a couple hours.  It’s not meant to be an emotionally moving cinematic event or anything.  I can’t give it a full out “must see it!” rating, but it would be worth a DVD rental at least.