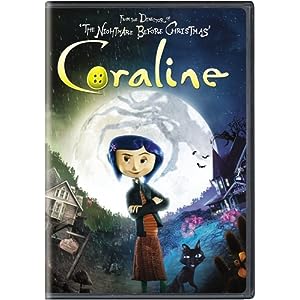 We were at Target today and saw the movie “Coraline” on the movie racks.  The Blu-Ray was on sale for $20, and Halloween is coming up so I thought a scary kiddie movie would be a great addition to our collection.  Reviews I’d read of it had been positive, and I was curious to watch it.

“Coraline” is a well-written, entertaining story that is voiced very well.  The storyline captures the viewer, never dragging or feeling drawn out.  I love that it is an ORIGINAL story!  So much of what we’re seeing in movies and TV these days are remakes and sequels.  While there have been some good remakes and sequels (ala Alice in Wonderland and Toy Story 3) there have some absolute abominations (A-Team… srsly?!).  In “Coraline” a girl and her family have recently moved, and she is not terribly happy in her new home.  She finds a secret door in her new house that takes her away to a “happy ” place that turns out to not be so happy.  It’s a easy to follow yet delightfully rich story that will certainly become a Hallween staple in our house.

As would be expected from a “Halloween-ish” movie, this DOES have it’s fair share of scary.  If your child is easily scared or is of delicate spirit I would hold off on this one.  In the “other” world the people have buttons for eyes, the appearance of which is a bit creepy.  The “other” mother wants to sew buttons on Coraline’s eyes, and make her a permanent part of the “other” world.  The buttons are placed out in plain sight with a needle & thread, and the “other” father remarks about how “It’s so sharp you won’t feel a thing”.  There are ghosts of 3 other kids the “other” mother has killed, and when Coraline goes back to her real world she find her parents are missing.  My older son was very concerned about her not being able to find her parents.  So whether or not this movie would be okay for your child is entirely dependent on how well they handle creepiness and scary situations.

We watched this in the bright sun of the afternoon, not right before bed.  Which is probably for the best!  They liked it, though they did find it to be a little on the scary side.