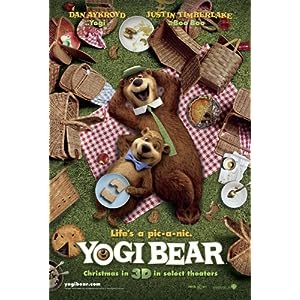 I’m terribly late in posting this review, we saw “Yogi Bear” while visiting family over Christmas and just hadn’t gotten around to writing this til now. When deciding on the movie to see, it was between “Yogi Bear” and “Gulliver’s Travels” (which we saw later and I’ve already written the review for) and I think the better decision was made here! A vote was taken, “Yogi Bear” won, so off we went!

Honestly, I didn’t go into this with very high expectations. Despite starring the delightfully adorable nerdy Tom Cavanagh, I basically just hoped it wouldn’t suck. Justin Timberlake’s “Boo-Boo” voice was mildly annoying, and Dan Aykroyd did a passable Yogi Bear. I found myself wanting to grab Anna Faris (Rachel) and shake her, yelling “WAKE UP!!!!”, as it seemed like she went through the entire film in a wide, doe-eyed stooper.

Visually, the effects of live-action + animation were reasonably blended. There were a couple moments where the actors weren’t quite looking at the animated characters.. but it was done fairly well. The park where it was filmed was a beautiful site, I didn’t catch on the credits where it was done, but it’s a gorgeous park.

All-in-all though, I can’t be too hard on “Yogi Bear”. I’m pleased to say it wasn’t as bad as it could have been. There were a couple good laughs, and it had Tom Cavanagh! So, while I can’t put it on the “Must See” list, put it on the Netflix que when it’s on DVD and zone out for a couple hours. It’s actually not that bad!