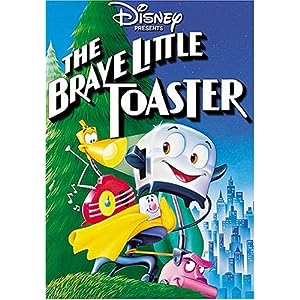 I know it’s an old(er) movie, but I saw this delightful little gem again the other night and wanted to write about it.

“Brave Little Toaster” is a Disney movie (well, actually DONE by Hyperion but sold/marketed by Disney), and as I watched it I was VERY struck with it’s similarities to “Toy Story”. Then I checked IMDB and saw John Lasseter and Joe Ranft both worked on “BLT” and “TS”. The influence was obvious! Characters are objects owned by a beloved owner, they come to “life” only when humans are out of eye & earshot. They work together, to stay with their owner, and their owner goes off to college!

In looking at the history of “BLT”, I don’t really think it was given it’s due justice by Disney. Perhaps it was a bit ahead of it’s time, and Disney wasn’t able to yet fully accept an animated movie about appliances instead of cute little animals or princesses? I dunno…

“BLT” is a cute movie. Complete with a Disney-scary scene in the garbage dump with the metal collector and trash compactor! (Again, a VERY “Toy Story”-ish scene repeated at the end “TS3” .)

It is from 1987, so don’t expect 2010-ish HD or Pixar animation. However, it is a VERY well done movie, with characters with feelings that kids can relate to and a storyline that doesn’t drag or wander. It is a true gem of a film, and it’s sad that it’s relatively obscure.