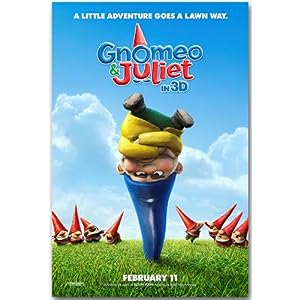 It has been MONTHS since there’s been anything for kids/family in theaters, and we [okay I] was/were so desperate to get out of the house and go SEE something that we went to see Touchstone’s “Gnomeo and Juliet” in the theater. Apparently a great deal of other people felt the same way, as the theater was quite packed. I have to say I wasn’t really impressed with the trailers for it, and my expectations were pretty low. Not quite as low as they were for “Gulliver’s Travels” but right down there.

The opening scene with the gnome reading from Shakespeare was pretty amusing, I have to admit. I love that the writers acknowledged and joked with the fact that yes, the story has been told before and yes, they were telling it again. Later, Shakespeare himself (via the voice of Patrick Stewart) tells the “real” ending of the story, and it’s a nice bow to the history of the tale before the happier ending of this movie. I liked that they paid homage to Shakespeare’s tale and that they didn’t take themselves too seriously with this re-telling.

My 7 year old LOVES lawn mowers & machines. So the use of the lawn mowers in this movie absolutely made his day. He LOVED it. The story was easy enough to follow, with enough jokes thrown in for the adults to be tolerable. The only scary moment was when it appears that one of the main characters has been smashed, I won’t spoil the whole story for you, but the smashing episode could induce a gasp or a tear from an emotional child. It also drew obvious inspiration from the “Toy Story” franchise, with the gnomes having to “freeze” whenever a human comes around.

The music of Elton John is one of the draws touted in the advertisements for this movie, and his “persona” makes a few cameos throughout. Honestly I thought the musical numbers were a bit overdone and too dramatic for the nature of the movie.

If there were other kids/family movies in theaters right now, this film would have a hard time drawing people in. As it is, there is NOTHING else out there right now, so it’ll probably have a fair showing for a couple weeks. If you simply MUST get out of the house, the weather still sucks, and there’s nothing else to do, and you have a few extra dollars laying around, this is a fine way to escape for a couple hours. I can’t give it glowing reviews, but I can’t say that it was entirely awful either.