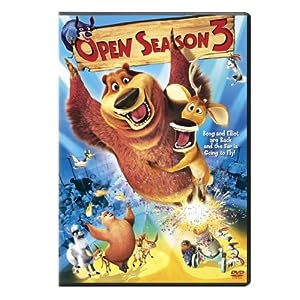 “Open Season 3” was released direct-to-DVD today, and as a huge fan of the first 2 Open Seasons I had to get myself a copy at Blockbuster!

After watching it, I have to say I’m kind of surprised that it was direct-to-DVD release. Sony probably thought that without the original Open Season voice cast that it wouldn’t have enough pull to warrant a theater release. One of the biggest critiques I’ve read about Open Season 3 is that without the original cast, it’s awful. I have to disagree… sure the voices were a bit different, but this isn’t the Toy Story franchise or anything. Perhaps I’m an incredibly forgiving person, but I really didn’t find the difference in voices to be all that much of an issue.

It was a cute story, fast-paced enough to hold kids’ attention and funny enough for everyone to laugh at. It is a bit on the short side, time wise. I think it was less than 90 minutes. Kind of makes it more of a long TV show than a “movie”. Truth be told, I was really happy to have something NEW to watch with the kids, with the pathetic selection of new movies [for kids] in theaters right now! Up against “Toy Story 3”, “Despicable Me”, or “How to Train Your Dragon” the new “Open Season” couldn’t hold it’s own in a theater, but Sony’s the timing of the release was great.

Run out and buy the Blu-Ray of “Open Season 3”? Eh, maybe not worth that much… but definitely worth a visit to Blockbuster or putting it on your Netflix queue!