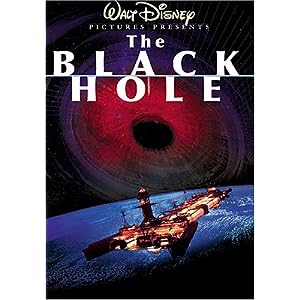 Usually when I dig in the archives for something, it’s for something good (ala Brave Little Toaster). Disney’s “The Black Hole” is something that should just stay tucked away. I LOVED LOVED LOVED the epic “Forbidden Planet”, so don’t think I’m a modern-special-effects-only snob or anything like that. TBH’s special effects were, for their time, actually not that bad. It’s not the effects that sucked, it was, well it was the plot that sucked. What was Disney thinking? The storyline drags, the characters are flat, and the ending is a MASSIVE cup of WTF?

First, this is NOT a kids movie. I’m so glad I did this as an evening screening after the kids were in bed. Kids under 10 won’t grasp any part of the story, and there are some pretty creepy parts that just aren’t for younger eyes.

With the exception of Maximilian Schell, the actors deliver pretty stiff characters. Schell and the evil robot tie for best character. That’s not really saying much though. Okay, I will give Schell credit for the best performance of the movie, his “crazy-insane-evil-freak” is actually not too bad.

During the movie I was constantly having to adjust the volume. The audio is insanely dynamic, to a horrific extent. The volume on my TV was at everything from 8 during the crazy loud music and gunfight scenes to 22 during the quiet dialog scenes. I could NOT hear the dialog without cranking the volume, but then the music would blast me and I had to turn it way down again.

Despite my characteristically unusual negativity of this particular movie (I like to be positive, and I look for the “good” in any and everything), I will say that I think the actual concept of TBH has potential. Normally the thought of remakes makes me cringe, but I actually think that with some story tweaks (especially the trying-to-be-all-thought-provoking-but-failing religious-toned ending that left me with a massive WTF?!) this could actually be a great piece of sci-fi. With modern effects, more dynamic characters, a good cast, and a re-write of the ending this could be a new classic.