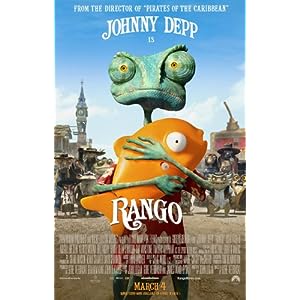 “Rango” was new in theaters this weekend, and we headed out in the monsoon-esque rains to check it out! My little guy has been looking forward to seeing this for MONTHS, since he saw the first preview for it ages ago. He loves lizards, snakes, animals, etc and was so excited to hear we were going to see it. From his perspective, it was a huge WIN! He loved the lizard main character and when Jake the Snake was introduced, the deal was sealed, it was his favorite since “How to Train Your Dragon”. For my older son, he’s nuts about sprinklers, so his favorite part was seeing the sprinklers in the Las Vegas scene.

“Rango” is a surprisingly deep movie, with messages most kids will probably miss. Not to say that it isn’t a movie for kids, because there are plenty of elements that kids will laugh at too. But the messages of “you are who you want to be”, and the deep self-awareness the main character develops aren’t something little kids are going to grasp. This movie isn’t all light-hearted and cutsie, but it is entertaining on multiple levels. So take the little kids, let them enjoy the silly parts, and hope that the older kids are able to let the deeper messages sink in.

The characters are animals, and some of them are rather “scruffy” in appearance. To the very skittish child they could be pretty scary looking, and there are a few scenes that could be a little frightening for some. All-in-all though, the scare factor is pretty low, with the “scary” parts being more “sinister” than full-out SCARY.

I think this is a quirky, off-beat movie that may gather some more negative reviews because it’s not all bright colors & light like Toy Story. But I think “Rango” has a good message, and makes for an enjoyable experience. Enjoy it for it’s quirkiness and use it as a start for good conversations with kids about “being themselves”.