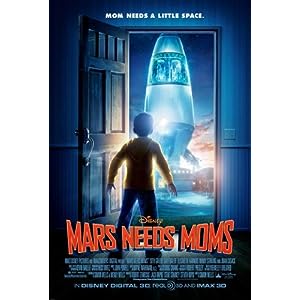 Ahh, we’re over the Jan/Feb funk of nothing new in theaters, and off we went today to see Disney’s latest: “Mars Needs Moms”. I have not read the book, so I have no preconceived notions about the story or characters from a book. Some people freak out that movies-based-on-books aren’t exactly true to their literary predecessors, a few friends of mine hated “Cloudy With a Chance of Meatballs” because of that, but I loved it. I am curious now, though, to find a copy of the book, just for curiosity sake.

A boy is startled one night to find his mom being abducted by Martians. He attempts to follow as she’s taken through the woods to the spaceship, and ends up stuck in the ship and going along for the ride. He finds a couple allies to assist him, and they uncover some secrets, have some adventures, and save the day. The movie is a bit of an emotional roller coaster, with lots of feelings expressed and dealt with. The possibility of the death of “mom” is a traumatic thought for any kid, and both of my kids gave a few gasps and worried looks a few times as they were worried about the character’s mom dying. (Yes, there is the quintessential happy ending, but I won’t spoil the details.)

On a different level, that kids probably won’t get, is the subject of the division of the sexes. The baby Martian boys are separated from the baby Martian girls soon after hatching. The girls are sent to be raised in a strict disciplinarian environment by their Nanny-Bots, and the boys are tossed into the “garbage” (basically) to be raised by the previously tossed out boys that are now grown, hairy, “wild” men. At the end, the realization of the importance of family comes about, and the sexes come back together. At first I was a bit bothered by the boys being tossed into the garbage, but I suppose they make up for it at the end, but I don’t really care for their portrayal as language-less, stupid, good-for-nothing creatures.

Seth Green and Joan Cusack are AMAZING in their roles as Gribble and Mom. They’re perfect, and there are no two better people to voice those roles. The Martians are a little creepy looking and Avatar-ish, but not so much as to make them unlikeable. As always, Disney animators don’t disappoint, and they provide a stellar visual experience. It’s a great movie, though I would recommend it for the 4 and up crowd. Any younger and there just isn’t the “toddler/little kid” draw to keep them engaged.

Disney hits the mark. Again. Will be adding this to our collection when it’s available on DVD/Blu-ray.