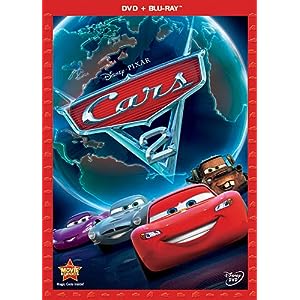 Surprisingly, other reviews have been very mixed regarding Cars 2. Some have really blasted it as being awful, a waste of time, how could Pixar have put this out, etc. To me, those trashing reviews are a surprise, I thoroughly enjoyed Cars 2. It’s perhaps not quite as good as the original, but making a sequel as good or better than a smashing original is not an easy task..

I was smitten from the opening scene. I love “Deadliest Catch”, and to see the Northwestern (a crab fishing boat) with the voice of Captain Sig Hansen getting a cameo was AWESOME. I think I may have been the only person in the theater to “get” it though.. Cameos abound, with Jeff Gordon, Brent Musburger, Darrell Waltrip, and Lewis Hamilton popping up here and there. John Ratzenberger has had a part in every Pixar production, he reprises his “Mack” character here. Michael Cane is perfect as the British Finn McMissile, all the vocal cast is splendid. I do have to admit that you CAN have too much Larry the Cable Guy… and the whole “redneck” accent did start to get a bit on my nerves by the end of the movie, but I was able to put the annoyance aside and enjoy everything else about the movie.

Some political outlets have labeled Cars 2 as being bad because it’s displaying a political message poisoning our childrens’ minds against Big Oil. WTF. Really? Politics have gone too far in our country, when someone actually thinks that an animated kids movie is trying to poison kids minds against oil companies.

The animation was Pixar-beautiful, the story easy enough for kids to follow. We follow the whole Cars gang as Mater gets Lightning McQueen involved in the World Grand Prix, and the resulting round-the-world adventure that finds Mater mistaken for an American spy. There weren’t any “OMG SCARY” moments, nothing that I think would cause any distress to any age group.

Like all things, don’t take it too seriously, and just enjoy it.