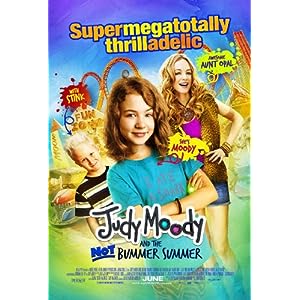 I haven’t read the “Judy Moody” book series, and I have boys so it’s doubtful that I’ll ever see them come through our house… so when we went to see the JM movie I went with no preconceived notions or expectations based on a book series (unlike when I saw the “Ramona & Beezus” movie last year).

It’s probably a good thing I had no preconceived notions, I think I’d have been pretty disappointed. Some things just don’t make the transition from book to movie well. The character of Aunt Opal for one. She shows up with this massive steamer trunk set up in the living room and proceeds to trash the house?! The “quirkiness and free spirit” was just over the top. The little brother’s lisp was incredibly annoying and I wanted to send him to speech therapy by the end of the movie, I would gladly pay for it out of my own pocket if his family’s insurance doesn’t cover it. Any amount would be worth it to not have to listen to that anymore. The main character’s made up exclamations are tiresome but bearable… as long as the kids watching don’t catch on and try and talk like that all the way home. Mercifully mine didn’t, but others may not have been so lucky.

Some reviews have said that the movie is constant go go go go go go with no time to pause and appreciate it. I didn’t see that myself. For my two, if a movie is too slow, they won’t pay attention and it’ll lose them.

There aren’t any really scary moments, even as they’re chasing/trying to lure bigfoot the scenes are funny enough that it’s obviously not real, and while the characters are supposed to be scared, it just doesn’t come off as scary. There is, however, a blue puke scene on a rollercoaster (yes, the puke is blue, as the puking character had been gorging on candy). But at least the puke is blue, kinda like how maxi-pad commercials use blue to demonstrate their products…

Anyway, I can’t really say that JM was full-out terrible, but it wasn’t anything to write home about. I guess there is a whole series of JM books? Judging from this, I don’t think we have to worry about the same thing happening with JM movies.