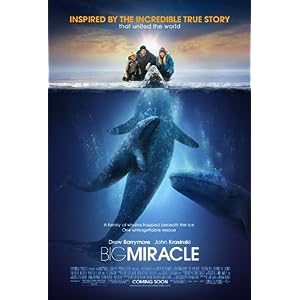 I was a bit on the fence about taking my kids (almost-7 and 8 ) to see this, as it’s not really a “kids” movie, and is significantly more story than action. It is, however, a true story and an engaging story and it has whales and a great big Russian boat so I thought what the heck I’ll give it a try.

I’m very glad I did. “Big Miracle” proved to be a well-told presentation of a true story from 1988 of 3 whales trapped in the ice near Barrow, AK, unable to get to the open ocean.  It’s kind of like “Apollo 13”, yeah, we all know how it ends, but it’s still an engaging movie to watch.  I was 13 when the event happened, and I don’t remember much about it. It’s a story about caring about what happens to others, and that even supposed enemies can work together sometimes and make good things happen.  Yes, the 2 adult whales do get freed, but it takes a massive combined effort to make it happen.

A spoiler (well, I don’t know how much of a spoiler, as being a true story the details are already known) is that the baby whale dies, and doesn’t make it to the ocean. This could be quite upsetting to some kids, mine dealt okay with that part of it, but it is pretty sad and the actors do a spectacular job of portraying the sadness felt when that happened.  At the end when the massive Russian/Soviet ice breaker rams the ice shelf, it’s an impressive sight. My 8 year old was gasping at the magnitude and power that was very well conveyed in the film.

I absolutely loved the use of real news footage. Hours must have been spent pouring over archived newsreels to find the TV coverage that was used! Impressive attention to detail there. At the end, real pictures of the real people were shown side-by-side with the actors so you could see the ‘real’ people.

Any kids under 6 or so won’t be impressed with it, nor will they be able to follow the story as it’s not a quick-paced, action-packed kind of movie.  There’s nothing inappropriate for any age, but make sure your kid will be able to sit for a 2-hour long story before taking them, or they probably just won’t get a lot out of it.