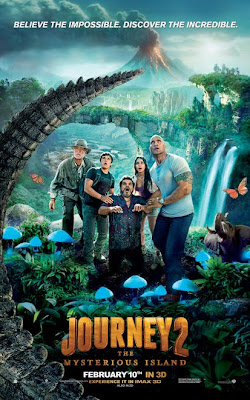 “Journey 2”, a sequel to 2008’s “Journey to the Center of the Earth”, was released just in time for my little guy’s 7th birthday. Being that he adores animals, dinosaurs and adventures it was a given that this is the movie we were going to see on his birthday.  I don’t think I really had much of a choice in the matter, but that’s okay.

Journey starts off with Josh Hutcherson revisiting his role as Sean Anderson, an irritated teenager who doesn’t let a little thing like breaking and entering or evading arrest stop him from getting the radio signal transcript broadcast by his grandfather.  His new step-dad (eye candy replacement for Brendan Frasier from the first movie, Dwayne Johnson) desperately wants to connect with the teen, and utilizes his convenient military experience as a code breaker to help Sean read the message and discover the lat/long coordinates of the fabled “Mysterious Island”.  A chartered helicopter takes the pair to the island, where they meet up with the grandfather and can only escape the island by means of an ancient sea-faring vessel left dormant for 140 years.

Fairly predictable, this movie is, however charming enough to maintain interest. Johnson’s character, Hank, and the grandfather, played by the almost-as-magnificant-as-Sean-Connery Michael Caine trade amusing alpha-male-ish bantering and jabs, predictably ending in mutual admiration and respect. The special effects are well-done, the actors, young & old, do a fine job. It’s not going to win any Oscars but it’s a delightful way to spend a couple hours this winter out of the cold.

There are some gratuitous 3D effects usage, like bouncing berries off of Hank’s dueling pec muscles. Juvenile, silly humor? Sure. But come on, this isn’t “King’s Speech”, it’s just fun entertainment. Go with it.

The helicopter crash scene is on the scary side, and could be VERY scary for a kid. They show a lot of close-ups of the characters’ faces, screaming and terror is well-shown in their expressions, and they show the helicopter ripping apart and pieces flying all around.  Being in aviation myself, I know a ‘real’ crash like that would be completely unsurvivable… but this isn’t real life, it’s science fiction. So they all wake up on the beach, without a scratch.

The are many animals and bugs, what we know as BIG animals are tiny (like a small cat-sized elephant) and what we know as small are BIG, like big bugs, insects and lizards. If a kid is afraid of bugs or lizards, it could be a little scary.  Both my kids did fine with the critters and the helo crash, but be advised (especially the crash scene) COULD possibly scare kids. As always, you know your kid, use your own judgement.

“Journey 2” is a good story, good effects, good acting… and we all liked it a lot. Don’t go expecting any work of cinematic wonder, lest ye be disappointed, but go expecting a fun entertaining tale.