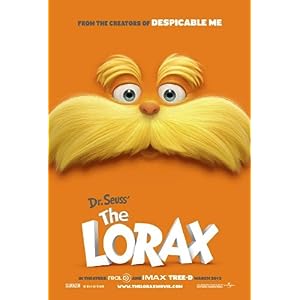 Yes, I’m a bit late with the review of Lorax, I know. My bad. “The Lorax” has been a very, very highly anticipated and marketed film for some time now, so of course I was excited to get to see it. I went in with great hopes, and had probably bought in too much to the hubbub surrounding it… Dr. Seuss’ “The Lorax” was published in 1971, and is an environmental warning tale of what happens to the environment and our natural resources when corporate greed runs amok.

It is visually very stunning, featuring the typical bright primary colors of Dr. Seuss’ books.  The vocal talents of Taylor Swift, Zac Effron, Betty White and Danny DeVito are perfect matches to their characters.  It was well-paced, not too fast, not too slow, and would entertain anyone of any age. I think toddlers, preschoolers and school-age kids will all be engaged throughout.

Personally, I felt there were WAY too many very over-done musical numbers… though admittedly I’m not a big “Musical” fan at all. It also seemed excessively loud in the theater, though that was probably more the specific theater’s issue than the movie itself.  We did the full-bore 3D IMAX viewing, which may feature overall louder volume than standard screens. I wasn’t impressed with the 3D or IMAX… and should have saved the money and just seen it in 2D, as my 7 year old wouldn’t keep his glasses on anyway.

I do like the overall message of “Lorax”, that environmental responsibility is important.  But what I wonder is, if the Once-ler had the last seed all along, why the hell didn’t he plant it himself sooner?!

Yeah, “Lorax” isn’t as good as the hype would lead one to believe, but it’s not bad… if you haven’t seen it already, you can probably wait to catch it on DVD. I don’t really have much to say about it, if you’ve read the book you already know the story.  It’s neither superbly amazing nor utterly sucky.