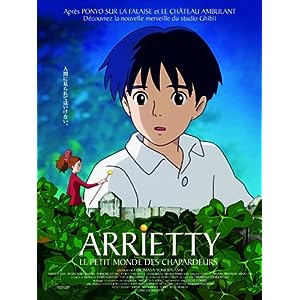 The story of “The Borrowers” is retold and released in the U.S. by Studio Ghibli & Disney as “The Secret World of Arrietty”.  It has several other names, depending on country of release, I believe the Japanese language version is already available on DVD, with English subtitles.  I’m always curious how accurate the translations are when they do that!  Alas, translation or not, it still a sweet movie that is typical of Ghibli and Miyazaki.

It is a typical Miyazaki film, with the big-eyed, fluffy-haired characters and casually-paced storyline.  The story of the ‘Borrowers’ has been told many times, little people who live in the walls & under the floors in houses, living off of borrowing things from the humans in the house.  The do not “steal”, only “borrow” what they need; things that are undetected and unmissed, like sugar cubes, kleenex, thread, pins, etc. If discovered by humans they must move as the human’s curiosity will not rest until the Borrowers are discovered and they live in fear of being eaten by pets or killed by humans.  It is a story of learning to trust, and learning to believe, as the Borrowers must trust the newest young human who comes to live in the house, and his believing in the Borrowers teaches his grandmother to believe in them too. I do love how the ending isn’t the quintessential “Happy Ending”, it’s not a *bad* ending, but not what we’re conditioned to expect from kids’ movies… and I loved it!

“Arrietty” is rated G, and it is fully deserving of the G rating. At one point the Borrower’s house ‘roof’ gets ripped off as the nosy housekeeper goes prying up the floor in the closet [that is the ‘roof’ of the Borrower’s house], but that’s about the scariest moment in the movie, and even that is mild and doesn’t rank very high on the ‘scare’ meter.  So no worries about anything scary.  It is not a action-packed, loud, fast-paced film, it’s a nice, strolling story, so relax & enjoy the calm pace.

I remember this story from when I was young, and enjoyed sharing it with my kids.